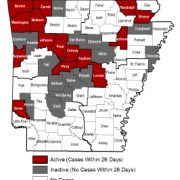 Mumps has been in the headlines lately, and for a good reason.  We are in the midst of a significant outbreak in several areas of our state, and cases of mumps have recently shown up in Northeast Arkansas. Here are a few facts about this disease:

More information, including detailed isolation advice, is presented in a recent Arkansas Department of Health Newsletter (see below), and you may feel free to contact us if you have questions or concerns. 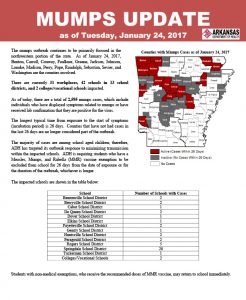 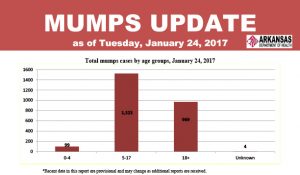 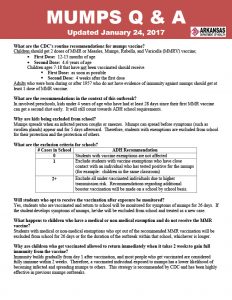 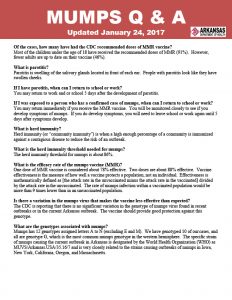 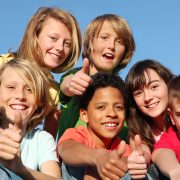 The Prevnar vaccine was first introduced in 2000, and has been modified several times. The most recent is called the Prevnar 13 and is administered at 2, 4, 6, and 12-15 months.  It protects against a bacteria called Streptococcal pneumoniae , which can cause anything from ear infections to more serious infections like pneumonia, bacteremia or blood infections, and meningitis or infections of the brain and spinal cord. It’s easily spread from person to person, and children under 2 yrs of age and adults older then 65 yrs of age are most susceptible to this infection.

Before this vaccine was available, this bacteria caused 5 million ear infections, 13,000 blood infections, and 700 cases of meningitis and 200 pediatric deaths a year. Of those that survived the meningitis, a significant number of them were deaf or neurologically devastated. See link from a family who want to show others what this horrible disease can do to a child.

Since the Prevnar vaccine hit the market, the diseases caused by this bacteria have been reduced 88%. The disease this vaccine prevents can be so aggressive and horrible, that it’s hard to understand why anyone would conceivably put their child at risk by not vaccinating.

This post and attempt at education is done in memory of those families who lost a normal and healthy child to this horrible disease, either through death or from neurological devastation. They did not have the opportunity to vaccinate their child, but you do!

Below is a video of a family with a child living with Pneumococcal Meningitis. 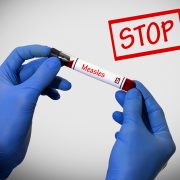 Measles is a viral infection that begins with a fever that lasts for several days, followed by a cough, runny nose, and conjunctivitis (pink eye).  The rash starts on the face and upper neck, spreads down the back and trunk, and then extends to the extremities (arms and legs) to include the hands and feet. After about 5 days the rash then fades in the same order it appeared.

That all sounds fairly benign, so why should we worry about the measles?
Here’s why!

How is measles spread?

Memphis had 3 distinct outbreaks and now 7 confirmed cases. The cases were not related to foreign travel and the health department could find no relationship between the outbreaks but are still investigating.

So what about the measles vaccine!

What about babies who aren’t vaccinated because they are too young?

Babies get passive immunity from their mothers (antibodies pass through the placenta), but no one is quite sure how long these last for. Thus this age group is very much at risk.

What other groups can’t receive the vaccine?

Pregnant women, those on steroids and other immunosuppressive medicines can not receive the MMR vaccine. This includes those individuals who have undergone transplants or are bring treated for cancer.

So the major take home point is that we need to get our children immunized with the MMR vaccine to protect them, but also to protect those in the community who are too young, pregnant, or unable to be vaccinated for other medical reasons. Stay informed by checking your local news and visiting our website for updates.

The largest review of the available evidence on the quadrivalent, or four-strain, HPV vaccine Gardasil, has found no evidence of any serious short-term or long-term safety issues. Bringing together the findings from clinical trials, post-licensure studies and data presented at scientific meetings but not yet published, the researchers focused particularly on autoimmune diseases, nervous system disorders, anaphylaxis, blood clots and stroke – but none of them is caused by the vaccine, they found.